BREXIT – KEEP CALM AND CARRY ON 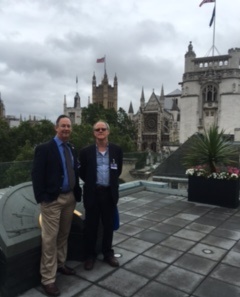 Pilar) and Past International Presidents Ian Lord and Roger Kallman joined me in discussing the future of the London Chapter. Robert McBride and I stayed in London for the remainder of the week and took an additional eleven meetings with members and potential members who had not attended the event itself.

By coincidence, a major event in British history – the United Kingdom vote to leave the European Union, (commonly referred to as BREXIT) occurred only a month before on June 23, 2016.  The Leave side won the referendum by 52% to 48%. The voter turnout was 71.8%, with more than 30 million people casting a ballot.  Thus BREXIT was the dominant topic in the British press during our visit. And the topic came up frequently as we met with various land economics professionals.

Each day I picked up The Times and/or Evening Standard to see the latest headlines:

The last headline comes from an editorial comment by Sir Roger Carr, Chairman of BAE Systems, a multinational defense and aerospace contractor. Here are some quotes that I think best represent the sentiments I heard:

In corporate gatherings through the UK, those of us who advocated Remain have continued to advance through the five stages of Brexit grief. Initial denial, anger and depression are giving way to thoughts of bargaining and acceptance. It is imperative that finding a solution rather dwelling on the problem is the order of the day.

Business must play the cards that have been dealt rather than lament the absence of a better hand. Brexit has disrobed international relationships, disrupted recovery, dislocated the certainty of unfettered trade with Europe and destabilized currency markets. In the short term however, our planned departure has deliver a helpful shift in sterling valuation that has hone our competitive edge for exports and provided a profit uplift to those companies with material dollar earnings.

Britain is rarely better than when faced with adversity. The outcome of the referendum may not be what many wished for, but rising to the challenge and beating the odds will be our only hope of building prosperity and a fairer society that once again becomes comfortable with itself.

Of the people we personally met with, I found only one professional (a LAI Member) who professed to vote in favor of leaving. And he viewed it as a “protest” vote and was shocked that it past! All others I visited with voted to stay in the EU and were similarly dismayed at the results. Indeed, the voters of the London area went against the national vote and cast ballots 59.9% for the Remain side.

What happens next and how does this impact real property in the UK?

That is the question that will be posed to a panel of land economic experts in a LAI London Chapter Fall Program Event scheduled for 4 November, 2016 at 8:30 AM to be held at the CBRE London offices at Henrietta House. [INSERT LINK HERE] The Brexit Event will be the convening of a panel of land economics experts who will, from different perspectives, present views of the situation in the short term and prospects for impacts arising from structural change over the long term. The Event will be open to all London real estate professionals and will serve to heighten the profile of the London Chapter and to identify prospective new Chapter members.

One thing is clear - land economics is a global discipline, as the UK vote to leave the EU initially sent shock waves through the world financial markets. Today, land economics professionals gather with their clients and consultants to ask questions with no immediate answers. More clarity will come with the passage of time as the actions of investors, financial institutions and others are reflected in the real estate fundamentals. My observation is the initial shock is wearing off and our British colleagues are calmly assessing the situation.

The UK has two years in which to serve Article 50, in which time the EU itself might break up as a result of other country referendums. We are in a post referendum period of uncertainty and, following a knee-jerk reaction, the political and economic situation is settling. The UK real estate markets continue to function and, while a number of unitised funds are selling stock to meet redemptions, truly distressed sales are not in evidence. Bargain hunters have been disappointed.

Find a collection of white papers and articles regarding BREXIT at https://www.lai.org/chapters/london. You will also find Robert McBride’s Report on the London Chapter Event on 25 July 2016. If you have contacts in the London market who might be interested in LAI, please pass them along to lai@lai.org.

Connecting professionals. Sharing Knowledge. Advancing best practices. That is more than a tag line; that is what we do at LAI, your honorary land economics society.