I’m sorry to report that our long-time friend, Fereydoon Ghaffari, has passed away on May 22nd. As you will see from his obituary below, he was a member of our chapter for well over 20 years, and served on our board for most of that time. He has been a dear friend to our chapter and on a personal level, and will be missed greatly. As you will see from the narrative below, he has accomplished a great deal in his 88 years. 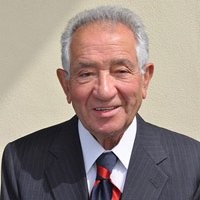 Born in Anzali, Iran Fereydoon Ghaffari started his life as a world traveler, architect and urban planner when he came to Los Angeles in 1947 to pursue an education in the sciences and math, and to learn English (his third language). At the University of Southern California, he received a Bachelor’s of Architecture degree in 1955, and was named, by his peers, as President of the American Institute of Architects Student Chapter and received a Phi Beta Kappa scholarship. He was selected by the School of Architecture faculty as a representative to a statewide conference on designs to accommodate the handicapped.

Over the five decades of professional planning, Fereydoon leaves an enduring positive impact on his profession, the communities he designed and the next generation of planners around the globe. His innovative designs created large-scale multi-use developments tuned to the long term needs of communities from California to China, and in his native country Iran.

He was the principal designer working with Victor Gruen on the conceptual design of Valencia CA, including the original layout of their paseos and greenway which allowed families and children to access schools and merchants without having to cross any street.  As the manager of the joint venture between Victor Gruen Associates and Abdul Aziz Farman-Farmian and Associates, Fereydoon led the work on the master plan for the city of Tehran, supervising a team of architects, economists and researchers on the 25 year plan.

In Xiamen, China, Fereydoon master planned the 120-acre Intex Recreation’s corporate offices and industrial park. Fereydoon’s plan honored the client’s priority to preserve and enhance an existing lake and 200  year old trees, while creating facilities to provide for the client’s rapidly expanding manufacturing, warehouse and residential needs. The Unitex  project received an Award for Integrated Master Plan by a Foreign-Owned Enterprise from the Municipality of Xiamen; and another four recognitions for the open space and design elements.

Back in Los Angeles, Fereydoon provided a series of financial pro-forma analysis for the iconic 24-story Center West project from its inception through the leasing period, providing the building’s ownership with real time adjustments to the building’s financial health during its formative period. He also served as the project manager during the design phase of the upscale extended stay hotel Plaza La Reina in the heart of Westwood Village.  He stewarded the project through its highly complex entitlement phase by working with City Planning, Department of Building and Safety, Department of Transportation and the Council Office.

Additional design work for which he was recognized included the planning of Waterwood, a community north of Houston, multiple venues for the 1984 Los Angeles Olympic Games, and Hacienda Miraflores in Malaga Spain.

For over 20 years, Fereydoon served on the Board of Directors of the Los Angeles Chapter of Lambda Alpha International, the global honorary land economics society, and served as the President from 1998-2000. In this role, he attracted many new members to the chapter, established the luncheon speaker’s programs and organized the venue series tours.  He was honored with the title of Lambda Alpha Fellow for his achievements and contribution to this organization that represents all professions related to the real estate industry. In his honor, the LA chapter established the “Fereydoon Ghaffari Speaker’s Series.”

Ever the lover of the outdoors, Fereydoon enjoyed spending time with his family hiking, camping and skiing.  Later in life he took up running when he became a charter member of LA Leggers, a running group, and he subsequently took on leadership roles within the organization. With the support and companionship of fellow Leggers he completed five marathons.

Loved and respected by all who met him, Fereydoon is survived by his wife of forty-two years Elizabeth of Los Angeles CA, his daughter Cynthia of Seattle WA and his son Hans of Van Nuys CA.