Paul began his talk with a quick summary of BWI’s evolution from Friendship International Airport, opened in 1950, into one of the busiest airports in the Country today.  Paul advised that Friendship International “was the only airport planned during the Cold War era” and to remind his audience how long ago that was in terms of flight technology, the workhorse plane of the day was a twin prop Douglas DC-3 “Tail Runner”.  Modern jets had yet to become a common sight on America’s runways.  Notwithstanding the nascent status of jets in 1950, Friendship International was designed for a future anticipating their use.

Fast forward to today and BWI is now the 22nd busiest airport in the Country with a $10/passenger infrastructure cost (“CPEP”) which is very competitive relative to other airports.  Other impressive stats for BWI include:

With “over $1 billion in capital expenditures planned for the next 5 years”, an important part of Paul’s job is to “maximize eligibility for Federal Funding”.   Paul and his team have some major improvements planned for BWI including:

In addition to these upgrades to BWI’s physical plant, Paul’s team are also in the process of auctioning off approximately 51 acres of land around the airport.  Proceeds from these auctions will go back into the aforementioned improvements.  This to-be-auctioned-land is a portion of the acreage acquired by BWI over the years for Noise Mitigation – an ever present issue for all airports.  As Paul advised his audience “BWI owns the runways, but the Feds own the airspace”.  So Federal regulators dictate the rules with respect to noise levels around BWI and any attempted mitigation thereof.

BWI’s current Airport Layout Plan is shown in the slide provided by Paul below: 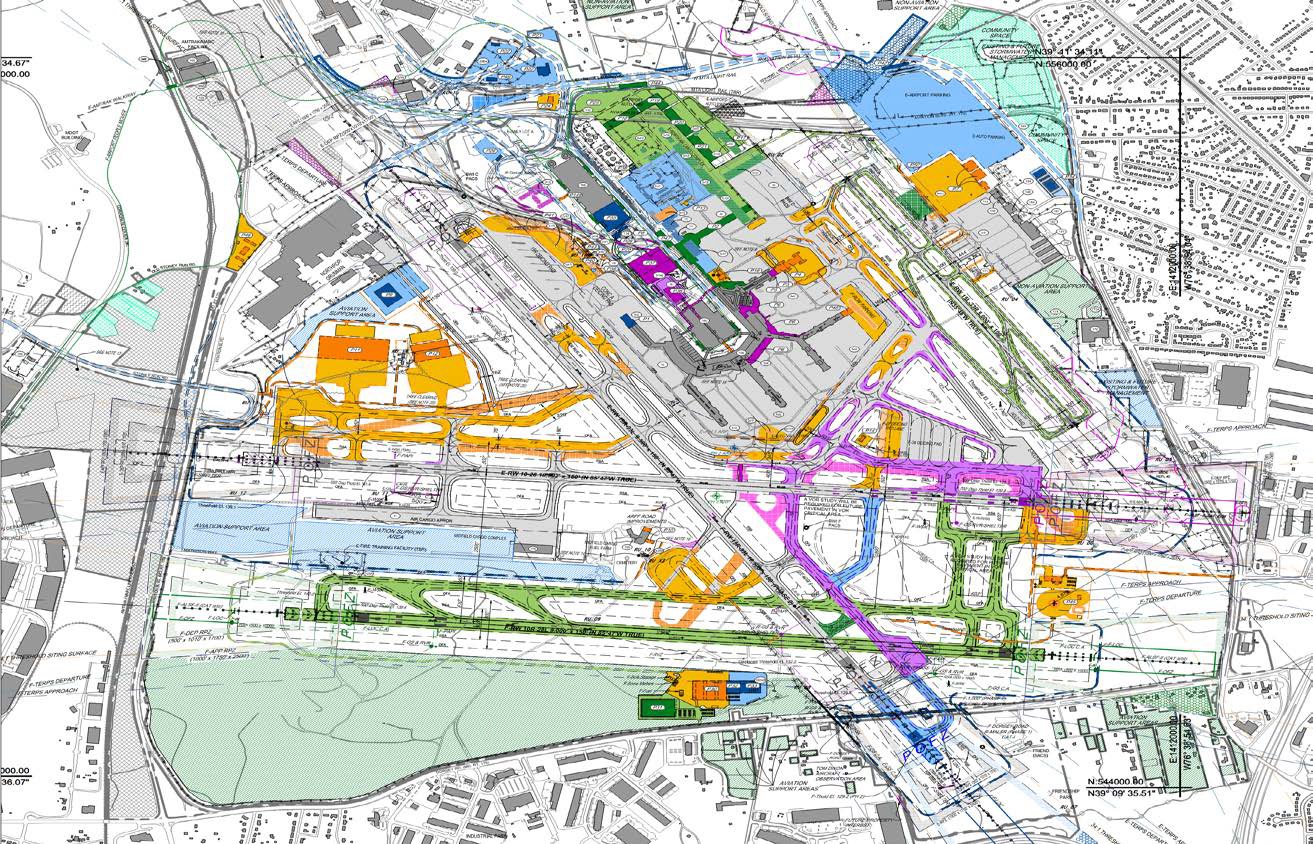 This growing and extremely productive airport has come a long way from its Friendship International days in the 1950’s.

Mr. Shank has served as the Chief Engineer at the Maryland Aviation Administration (MAA), Maryland Department of Transportation (MDOT) for over a decade. During that time he has led the planning, design and construction of the billion dollar capital improvement and systems preservation program at Baltimore/Washington International Thurgood Marshall Airport and Martin State Airport. He oversees MAA’s Office of Engineering and Construction, Office of Planning, Office of Environmental Services, and Office of Real Estate and Noise Abatement.

Mr. Shank has over 40 years of experience in airport development and associated transportation, commercial and institutional development. His accomplishments are measured in the billions of dollars of projects completed throughout the United States and overseas.

He is a Professional Engineer and a Certified Member of the American Association of Airport Executives.  He was the recipient of the 2015 AASHTO President’s Transportation Award for Aviation and in 2016 received the Federal Aviation Administration’s Henry “O” Award.  Mr. Shank is a commercial pilot, flight instructor and aircraft owner.  Aviation is his passion.