On January 17th, Gary McGuigan of the Maryland Stadium Authority joined the Baltimore LAI Chapter’s luncheon meeting to provide an overview of the Authority’s numerous activities within our fair State.  The MSA is involved in a breath of activities that far exceeds what one would infer from its name – much of it “behind the scenes” and largely unknown to the average taxpayer such as this writer.

When one hears “Stadium Authority” it’s natural to conclude that Camden Yards and Ravens Stadium fall within its purview.  But in Gary’s calm and understated manner, he walked his LAI audience through all the other activities that the MSA oversees, aside from managing the State’s stadiums.

Gary apprised us that the MSA was formed in 1986 to oversee “Oriole Park and attract a football team”, as its original mission focused on “sports and economic development”.  Since that time the MSA has evolved into an entity with a significantly broader reach of activities that include:

As an example of the first of these above mentioned activities, Gary discussed the Ocean City Convention Center.  MSA completed a feasibility study on the potential expansion of OC’s Convention Center, and he expects to begin overseeing construction of a 30,000 SF expansion, with a $34M budget, in the Fall of 2018.  MSA’s analysis predicts that the expansion will result in an annual fiscal impact in the range of $3.3 – 3.4M for the city.  This is but one of many projects the MSA has handled over the past 25 years.

Each of MSA’s studies attempts to quantify the economic value and impact of a proposed project.  Other notable studies Gary mentioned that are currently underway include:

The following slides encapsulate the broad range of projects overseen by MSA over the past few decades: 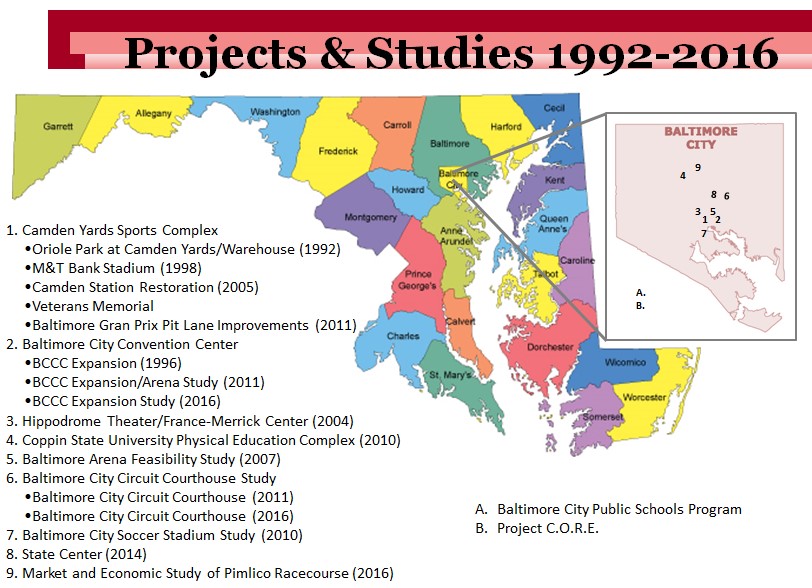 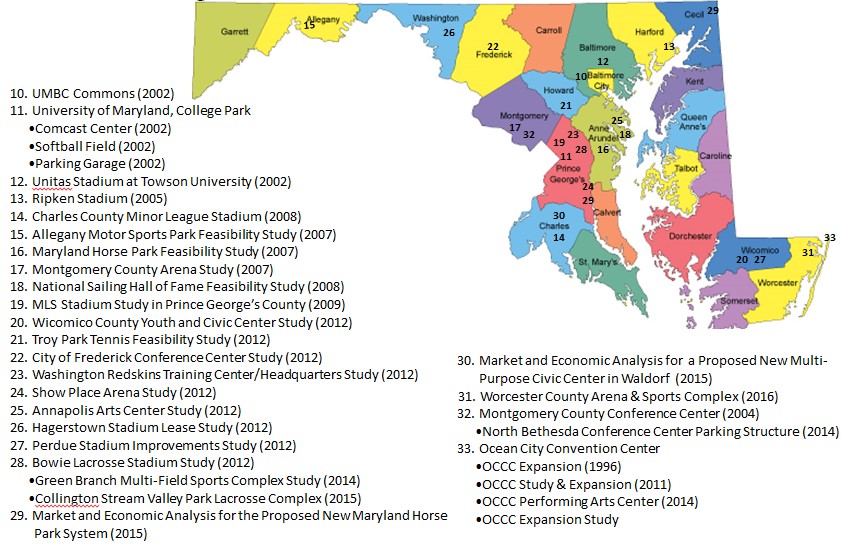 With respect to Baltimore City’s school rebuilding program (known as “21st Century Schools”), the MSA is overseeing an enormous undertaking.   In total, 26 - 28 schools are slated for substantial rehab or complete replacement.  At present, the first two schools are complete and opened in 2017, seven additional schools are under construction, five schools are in active design, and 14 more are in various stages of planning.  That’s more than enough work to justify the creation of an entirely new, single-purpose governmental entity, but not only does Gary’s team appear to handling this undertaking in stride, they are bringing in these projects 5% under budget to date.  Amazing to hear about any government sponsored construction endeavor coming in under budget!

MSA is also assisting with the demolition of blighted areas of Baltimore under the “CORE” acronym mentioned above. This initiative has already eliminated approx. 1,376 obsolete structures and has a goal of knocking down another two to three thousand over the next 3 years.  Opening up opportunities for redevelopment and creating green spaces are the goals of this State & City funded program.

Gary stressed that MSA tries hard to be “objective and conservative” in their advice to the municipalities and agencies it conducts studies for.  And once a project has been given a green light to proceed, he insists it be “on time and on budget”.  MSA is a “public agency that runs like a business”, with a 7 member board.

So, we have a State employee who studies each proposal to spend taxpayer’s money carefully and objectively; hires employees who are empowered as “managers”, responsible for ensuring that consultants & contractors do their jobs properly; handles a multitude of large, diverse projects simultaneously; and brings projects in on time and under budget.  Who knew our State had an agency so well run, with such breath of activity and apparent efficacy?  Color this writer, who is inherently skeptical of Big Government, as pleasantly shocked.

The LAI Baltimore Chapter thanks Gary for the education about the Maryland Stadium Authority, and for the obvious value that he and his agency bring to our State.   Gary’s bio follows below:

Mr. McGuigan has been with the Authority since 1995 starting out in a project management capacity and currently serving as Senior Vice President, leading a team of 30 people in the Capital Projects Division.  Mr. McGuigan is an engineer with over 30 years of experience in project management of diverse projects ranging up to $150 million.  Mr. McGuigan is currently managing Project CORE and the $1.1 billion revitalization plan to finance, construct and renovate the Baltimore City Public School system as well as economic projects and studies around the state.  Recent projects and studies include the $130 million Physical Education Complex at Coppin State University, the Baltimore Convention Center/Arena study, the evaluation of Preakness Stakes at Pimlico and the Baltimore Circuit Court initiative.  In addition, other completed projects for the Authority include the renovation of the historic Camden Station, the historic Hippodrome Theater, a venue for Broadway shows, a new hotel and conference center in Montgomery County and Ripken Stadium, a minor league ballpark in Aberdeen.  Mr. McGuigan’s original project with the Authority was the expansion of the , which was completed on time and under budget. Prior to joining the Authority, Mr. McGuigan led the design effort for a new high school in .  Prior to 1994, Mr. McGuigan worked for the Facilities Development Corporation in for eight years focusing on capital projects on psychiatric center campuses.  Mr. McGuigan is a graduate of Rensselaer Polytechnic Institute with a Bachelors of Science degree in Mechanical Engineering, and holds the LEED AP credential.

The Retail, Office and Commercial Market and the Impact of COVID-19