In years past, Xpera Group has been involved in a consulting capacity in numerous wildfires throughout California.  Its role has been to determine damages and cost to repair. Its most prominent engagement involved the 2007 fires in northern California.

For that reason, we have taken a particular interest in the wildfires in October 2017 in the Santa Rosa area of Sonoma County –known as “The Tubbs Fire.” Xpera’s Director of Economic Research, Alan Nevin, has been involved in that fire because of his friendship with Jim Ryan, a major developer in Sonoma County. Jim Ryan’s son, Jack Ryan, is heading up a research program as an intern for LAI San Diego. 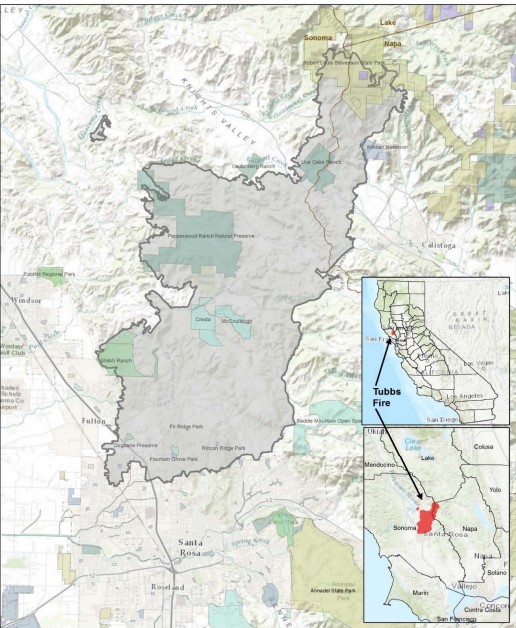 The wildfire started on October 8th and has burned some 37,000 acres. By October 20th, the Tubbs Fire had become the most destructive wildfire in the history of California. Two dozen people died. More than 5,600 structures were destroyed.

Included among the structures destroyed were 4,658 homes in the Santa Rosa area, including the communities of Fountain Grove, Calistoga, Coffey Park and Larkfield.

With winds of 50+ miles per hour that fanned the fires, households were told to immediately vacate their homes and apartments. On October 10th, the entire city of Calistoga was told to evacuate.

Many of the homes were worth more than $1.0 million. Total damage is estimated at $10.0+ billion. The fire was finally fully contained on March 31st.

The amazing story of Tubbs is that more than 4,000 households, hospitals, schools, businesses, shopping centers and senior centers evacuated without panic.

Virtually none of the residents are able to re-occupy their residences (most of which no longer exist) and remain nomads today.

Fortunately, many of the residents had friends and relatives in the unburned areas and others had second homes, often as far as Lake Tahoe. As apartment vacancy rates are effectively zero in the greater Sonoma/Marin County areas, those were not an option for relocation.

A major problem remains: how do you rebuild 4,000+ homes in a geographic area that does not have hundreds of architects, general contractors and laborers sitting around doing nothing?

The nine-county Bay Area, with a 7.7 million population, has a highly vibrant construction industry and, reportedly, is stretched thin, desperately short of skilled and unskilled labor.

It is estimated that the costs of reconstruction in Santa Rosa could be 50% higher than in the urban areas of the Bay Area and that time to rebuild could be substantially lengthened.

I think in terms of architects. If only half of the homes were custom and would be rebuilt as custom homes in the future, we are talking about hundreds of high-quality custom home architects that would need to sign on to do work perhaps 50-60 miles from their home bases, as Santa Rosa does not have a major supply of custom home architects. Similarly, contractors would look upon the lengthy commute as untenable without major enhancements in budget. On-site workers would also need to commute as there are few if any local residential facilities for them to inhabit.

On balance, it could take a decade or more to rebuild the communities that were destroyed.

The other question relates to value. What is the lot value in communities where hundreds of lots are potentially available? Many of the former homeowners are seniors (20% of the population of Santa Rosa is over age 60) and may not choose to rebuild again. Further, if a multitude of lots do get resold and developers opt to build them as “spec” homes, can they be priced at levels that would attract large numbers of buyers, perhaps as second homes.

How does one calculate the real economic damages, even ignoring the value of personal belongings and keepsakes of thousands of residents?

These questions and their answers will, no doubt, be the subject of numerous case studies and, no doubt, litigation, over the years. Santa Rosa is a work in progress.