The Aloha Chapter met for its quarterly luncheon meeting on Friday, March 2nd, at the Oahu Country Club, to initiate new members and to hear a presentation on climate change problems and remedies by Josh Stanbro, Director of the Honolulu Office of Climate Change & Resiliency. Stanbro began by summarizing the 100 Resilient Cities initiative funded by the Rockefeller Foundation from over 1000 worldwide applications. Honolulu is one of those cities and the only one with a dedicated office for climate change and resiliency. The initiative provides partnerships and resources from sources like Microsoft, the AIA, the ULI, Siemons, and the World Wildlife Fund. The Honolulu Office is developing a climate change strategy which is expected to take about a year to develop after research and a series of community meetings. The strategy is directed at formulating resilient responses to Acute Shocks (like earthquakes and tsunamis) and Chronic Stresses (like sea level rises) resulting from climate change. According to Stanbro, recent worldwide extreme weather in the form of hurricanes, fires, floods and mudslides, are brought about by, in part, the roughly 100 million tons of pollution discharged into earth’s relatively thin atmospheric skin. Using Honolulu as an example, Stanbro noted that the city has experienced 11 days of record rainfall, 24 days of record heat, and 9 months of drought in the past year.Tradewind days have dropped from 290 to 210, and there have been several “King Tides” about 10 inches above normal with substantial inundation of coastal areas. At this rate, Honolulu can expect a rise in sea level of about 3.2 feet over the next few years, resulting in $13 billion in private structural damage and destruction. The water table will also rise. In addition, a record 15 tropical storms narrowly missed the Hawaiian Islands this past season. The strategy upon which his office is working is expected to divide climate change problems into nine categories and forty-eight recommended actions. 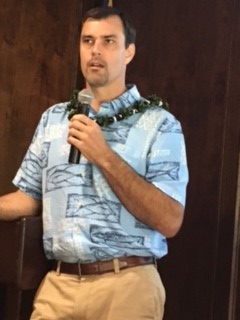 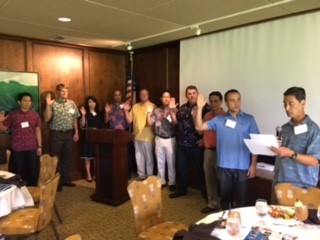