Succeeding in the Age of Dead Malls, Amazon & Online Competition 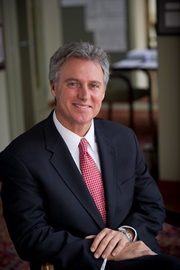 On September 20th, Brian Gibbons joined LAI’s monthly meeting and provided an overview of how his firm, Greenberg Gibbons, has not only survived the multifaceted headwinds facing the brick & mortar retail industry, but has thrived, creating highly successful projects that have consistently drawn throngs of consumers.

Brian began with a brief history of Greenberg Gibbons, which was started by Erwin Greenberg in 1968.  Erwin began modestly by rehabbing townhomes, but soon dipped his toe into simple, one-story retail, beginning with the Garrison Forest Plaza in Owings Mills, thinking “how hard can it be?”  Brian joined the firm in 1999, and began his tenure by working on The Village of Waugh Chapel, which opened in 2001.  This innovative, mixed use project integrated retail, office and apartments to create a “work, live,  play” environment and defined the “future of mixed use in Anne Arundel County”.   With Waugh Chapel as a showcase demonstrating what Greenberg Gibbons was capable of creating, Prudential committed $1B to a Joint Venture with GG for future developments.  With this substantial equity backing GG moved on to create Annapolis Towne Center, and bring the Hunt Valley Mall back to life (previously a poster child for the website, DeadMalls.com).  In 2008, Brian bought out Erwin Greenberg and brought in Calsters as a financial partner.

Brian referenced the now ubiquitous phrase “The Retail Apocalypse” in conjunction with the Toys-R-Us bankruptcy filing which took place just a few days prior to our luncheon.   Toy-R-Us is just the “latest example” of a string of recent announcements by large retailers who are now troubled.  Brian advised that most people consider the Internet to be the sole cause of the retail industry’s troubles, but he opined that “the U.S. has overbuilding retail for a long time”.   To counteract internet/overbuilding trends he began to conceive of “creating the experience” back in 2001 as the solution to maintaining his project’s viability.  The “experience” consists of a one-stop destination where guests can “eat, shop, work and play”.

The “eat” portion of the formula is best satisfied by the types of premier food purveyors Brian has attracted to his projects, such as Wegmans, Wholefoods, Harris Teeter and Trader Joes.   The “shopping” part of the formula must include the type of “soft goods stores that are expanding, such as TJ Maxx”, where shoppers are engaged in a “treasure hunt” for cool bargains.   The “work” component can be, for instance, medical offices on the second floor of a project.  And the “play” portion of the formula can be best satisfied by a mix of theaters and fitness, such as cycling, pilates and yoga.   With this formula, Brian opines that he “can make our projects the community’s gathering place”.  As an example he cited the 3,000+/- people that show up to the concerts GG regularly sponsors at Annapolis Towne Center.  Brian advised that the best retail projects are “constantly evolving”, with innovative new offerings such as valet parking, free wifi, charging stations, and the latest furniture/fixtures.   Successful retail developers must “understand current trends” such as the growing health consciousness of consumers and address those trends.   And finally Brian emphasized that “security is the most important aspect of getting people to come”.   Unless people feel safe, no product offerings or amenities will drag them from their computer screens to a retail location.

Brian summarized by opining that retail is “not an apocalypse – just an ongoing evolution”.

The Baltimore LAI Chapter, as well as the greater Mid-Atlantic region, are fortunate to have a retail visionary such as Brian in our midst, who not only creates outstanding retail environments for us all to enjoy and benefit from, but who reminds us astutely that the death of retail has been greatly exaggerated (with apologizes for torturing Mark Twain’s famous remark upon the rumor of his demise).

Brian J. Gibbons
Chairman of the Board and Chief Executive Officer

As Chairman and Chief Executive Officer of Greenberg Gibbons, Brian Gibbons is the visionary behind many of the most successful retail destinations in the Mid-Atlantic region. His company has created award-winning mixed-use and revitalization projects with a value in excess of $1.2 billion. Major highlights include innovative redevelopments such as Hunt Valley Towne Centre, Annapolis Towne Centre, Towne Centre Laurel and Foundry Row at Owings Mills; the ground up development of The Village at Waugh Chapel, Waugh Chapel Towne Centre and Turf Valley Towne Square; and current plans to update The Shops at Kenilworth in Towson. Greenberg Gibbons creates places where people love to work, shop, live and play and these developments become valuable community assets.

Prior to joining Greenberg Gibbons, Mr. Gibbons was a Partner and member of the management committee of Fedder and Garten, P.A., a Baltimore-based law firm.  He serves on the boards of Sinai Hospital, Hospice of the Chesapeake, and the University of Maryland at Baltimore.  In 2013, Mr. Gibbons received the Distinguished Citizen Award from the Boy Scouts of America’s Baltimore Chapter for exemplifying strong community leadership and personal integrity.  He holds a Bachelor of Arts Degree and a Juris Doctor Degree from the University of Maryland.

Aloha Chapter Q4 Mtg: Advances in Resilient Design Standards in Hawaii and How They Apply to Developers